David Dweck: His Reinvention to Real Estate Renegade 
Notice: Trying to get property 'session_id' of non-object in /home/palmhealthcare/public_html/wp-content/plugins/ninja-forms-legacy/deprecated/classes/session.php on line 122 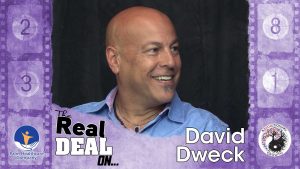 At the age of 18, David Dweck decided he was going to bypass college and get a job working at a recording studio. When everyone heard about his decision, they all told him it would never happen.

Instead of giving up, Dweck responded with “Watch me.”

Soon enough, Dweck was working at a recording studio over the summer in New York City.

That same tenacity followed Dweck over the course of his career in both the music industry and in real estate. These days, Dweck is a real estate renegade, who leads Florida’s number one real estate club, Boca Real Estate Investment Club (BRIC).

Recently, David Dweck appeared on The Real Deal On… with Dug McGuirk where they discussed the topic of reinvention. Dweck says reinvention has been a major theme in his life both personally and professionally.

Originally, Dweck desired to work in a recording studio as an audio engineer. He was willing to do whatever it took to achieve that goal, even work for free.

Fortunately, his determination paid off. Three stations offered Dweck a job, and he ended up working for a company called Media Sounds.

“I knocked on doors, and I said, ‘I’m hungry, and I’m willing to work for no money, I’m willing to sweep floors,’ and Media Sounds said, ‘Nope, we’ll pay you and we’ll hire you as the night time receptionist,’” he remembers.

Media Sounds was a radio station based out of New York City. Dweck worked the night shift as a receptionist from 4 pm to midnight. Working in the evenings was an exciting time, Dweck says. On one occasion, he even met Mick Jagger.

“A lot of good stuff happens to you at night,” he says. “I walk in for my 4:00 shift and I remember Lisa, the woman I replaced, she got off at four. She goes, ‘You won’t believe who’s downstairs in Studio B!’”

Dweck says it was a “surreal” experience and when he looks back at his time in the music industry, he does not have any regrets.

“I got a taste of it, and that was gratifying,” he says. “No regrets. I sit here today happy with the time I had there.”

Despite his success, Dweck began to realize how fleeting the career of an audio engineer really was.  As a result, he decided to go to college and earn his degree in Communications at the University of Miami.  He then spent close to five years working in radio and production sales.

While he was passionate about his career in communications, he eventually decided to pursue a different path. His decision was based on the major shifts he continued to see occurring in the radio industry.

“What was that venture? They financed Woodstock. Those were my bosses. They sold the studio,” he says.

“That’s when the light bulb went out,” he says. “If they’re getting out, that’s a sign.”

Ultimately, Dweck  “saw the writing on the wall” and decided to move toward a career in real estate.

“I realized that real estate would be the long term path to benefit my family and to create a life style,” Dweck says.

Still, pursuing real estate did not come without its own set of challenges.

“At the time, I was starting a family, and it was a very big risk to take, and I embraced that,” he says.

Despite the risks, Dweck started his career as a real estate investor. He acquired his real estate license in 1993.  He was determined to succeed despite the voices that told him there was no money in real estate and that it was too much hassle to bother with.

“I strategized both short-term and long-term realizing this will be my retirement, so for every house that I bought, built and sold, I also would take that money, reinvest it into a rental property and get bank financing,” he says.

Dweck had to learn the ropes in real estate, so he started studying and learning from mentors. His mentors taught him how to deal in reality and not in theory. This inspired him to create the Boca Real Estate Investment Club.

“That’s one of the reasons why I started the Boca Real Estate Investment Club because there’s really not a how-to manual for investors back in the day, especially down here in South Florida. It’s kind of like the wild, wild west.”

In 2007, Dweck was faced with another major challenge: the declining economy. Along with the decline in the real estate market, Dweck’s marriage was declining as well.

“When your business is suffering, you want that life time partner, not only behind you but beside you, and I did not have that,” he says.

“That really hurt, so I had to dig in deep because, in 2008, it was on, and I was coming into the office every day and doing damage control, watching the relationships I’ve built and watching people suffer.”

Dweck remembers seeing one of his friends, who was worth 60 million dollars at the time, lose it all.

“I’m thinking ‘Wow, the sky is falling.’ I’m like mystified,” he says.

Fortunately, Dweck was relatively conservative with the risks he took. Still, he began to question whether or not he should give up on his career in real estate.

“The answer, I answered myself, and that answer was a resounding no, I’m not going to do that. I’m going to dig in so deep that whatever it takes, I’m gonna find solutions,” he says

Overall, the experience taught him who his real friends were and how resilient he was.

“You never forget these challenges and how you are able to rise to the challenge,” he continues.

Ultimately, Dweck’s resilience and courage helped him navigate all the obstacles thrown his way.  He defines courage as having “balls” and feels this applies to both men and women.

“I think you really have to have a lot of self-belief and have the courage to not just try, but really go for it,” he says.

Reinvention is about having the courage and “balls” to persevere despite life’s challenges. Dweck’s journey defines reinvention. Please check out the full interview for more insights into Dweck’s career in real estate, and hear the crucial advice he gives to those struggling in their own journey.

If you feel like giving up, remember it is never too late to make a transformation. Please reach out if you are struggling. We are here to help. You do not have to do this alone. Call now.